Lepakshi has been in my mind for quite a long time. Though it is very close to my native place in Pavagada taluk and I have heard its significance from my parents since my childhood, I somehow never had a chance to visit it. In fact, few months back when I read an article about this place in Deccan Herald; I decided to go the very next weekend. But somehow things didn’t materialize then.

But the photos from an ex-colleague’s photowalk group on Facebook changed that. Thanks to the high-end cameras, some pictures were enhanced so much that I felt they lost their natural colors. So, I decided to go and check out on my own.

Lepakshi is about 120 kms from Bangalore. So, I started at about 6.30 in the morning on July 21st with plans of coming back early in the evening. One can take the Gowribidanur-Hindupur route or the Chikkaballapur-Bagepalli route to reach Lepakshi. I took the latter as I knew that the roads were good (I was on that road a week before while visiting my native).

But what I didn’t know was that there is only one good food complex on that entire stretch. The food complex had Kamat Upachar (and Nandini restaurant, as I learnt later) which was too crowded when I reached. I skipped that with a hope that I would find something decent in Bagepalli. When I reached Bagepalli, I found that though it has many street-side food huts, none of them had a seat where I can lean my back on and take a much needed break. Disappointed, and with grumbling stomach, I went ahead hoping that I will find something near the temple at Lepakshi.

As soon as I entered Andhra Pradesh, I noticed their tourism department’s restaurant and barged in with a huge smile on my face. But then, the joy melted when I was served idli with cold sambar. When I asked the supplier, his excuse was that it was too late in the morning. Seriously? 10 a.m is late for a hot idli-sambar?

Lepakshi is about 20 kms from that restaurant. I reached Lepakshi at about 10.30, almost an hour later than my planned time. My first stop was the Nandi. 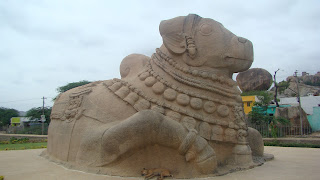 This is India’s largest monolithic Nandi. It was carved by well-known sculptor Jakanachari.

The main temple is about 500 meters from the Nandi. I went around the main temple for about an hour and was about to leave when I saw a guide explaining the history of the temple to a group. I joined them and here is what I learnt.

The name of this town is derived from Ramayana. While Ravana was taking away Sita, an eagle by name Jatayu tried to stop him. During the fight, Ravana cut one of its wings and the bird fell in this place. Later, when Rama came in search of Sita, he saw this bird and said “le, pakshi” (which means “get up, bird”). Hence the name Lepakshi.

This temple was constructed by Virupanna, a chieftain under the Vijayanagara king Achyutaraya. The theme of this temple is Shiva’s marriage with Parvati. The sculptures and paintings on the ceilings depict various events of marriage. 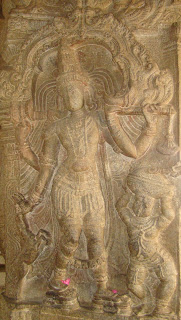 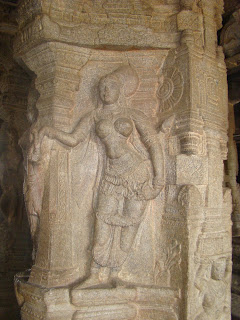 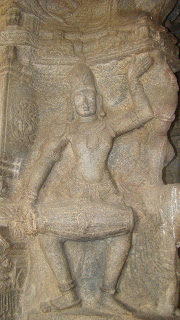 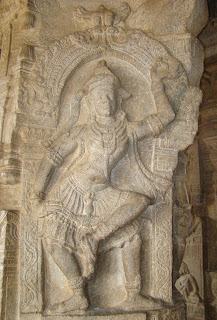 Most of the paintings on the ceilings are still clear.

Shiva being welcomed for his marriage 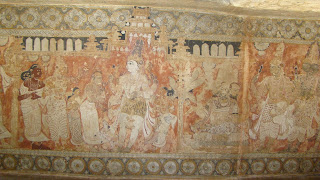 Parvati getting ready for her marriage 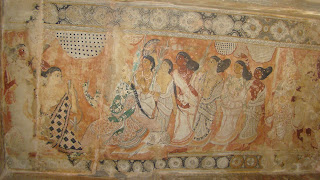 And the marriage begins… 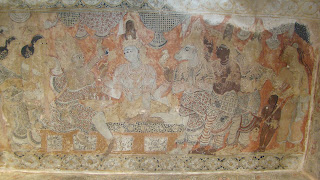 The highlight of the hall is the hanging pillar which supports all other pillars. Once the British got curious on how this pillar can stand without any support at the bottom and tried to move it. They had hardly moved this by few centimeters and all the pillars of the hall started moving along with it. They feared that the temple will collapse and stopped it there. Even today, one can see the pillar is tilted by about 10 degrees. 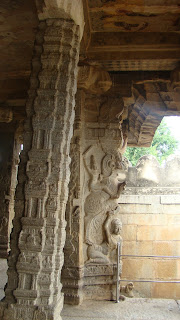 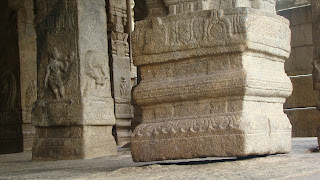 The pillars around this are also tilted slightly.

Once, when the laborers came to the dining hall for lunch, the cook asked them to wait for some time. Instead of wasting time, these laborers carved out a serpent (shown below) in front of the dining hall. When the cook came out to invite them inside, she was so shocked and the idol cracked in three places. As per Hindu tradition, a broken idol cannot be worshiped. So the chieftain installed a Shivalinga below the serpent’s hood. 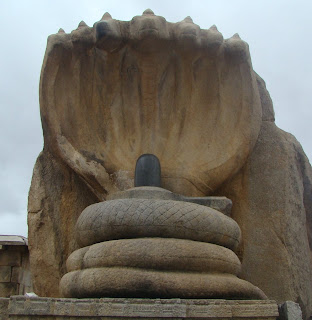 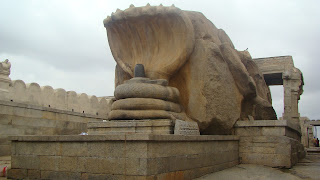 And because every Shiva temple should have a Nandi facing the statue, Nandi (mentioned earlier) was carved out outside the temple premises. Today, even though lot of houses and shops have come up between Nandi and the main temple, one can see the serpent’s hood from one corner of the Nandi statue.

King Achyutaraya died while the construction was on. People who disliked Virupanna complained to new king (forgot his name) that Virupanna was wasting money by constructing a temple on some hilltop. The king immediately ordered that his eyes be gouged out. When Virupanna learnt about this order, he pulled out his eyes on his own and threw them on a wall. The spot where his eyes hit the wall still bear the red color blood stains. 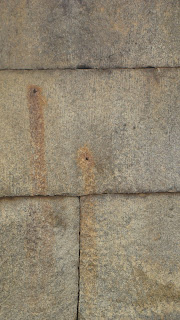 The temple construction stopped after Virupanna’s death. He completed the main hall and the temple. and got the pillars and sculptures ready for the marriage hall. 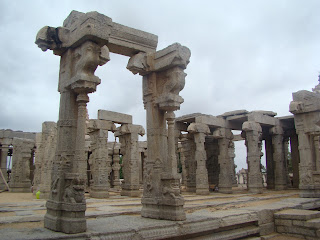 These pillars have Lord Brahma at the entrance of the hall ready to welcome guests and Saptarshis on the platform giving company to Brahma. 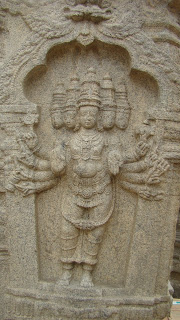 In what appears to be the inner part of the hall, the Gods have taken positions as per Vaastu shaastra. For example, Yama is in south and Kubera is in the north.

Apart from these gods, other carvings on these pillars include two acrobats, two monkeys carved in such a way that they look like four monkeys in various positions, and a woman showing the right way of keeping bindi. 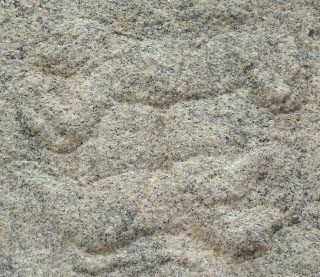 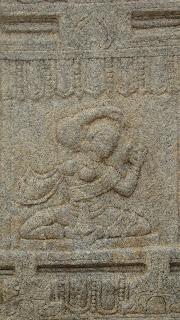 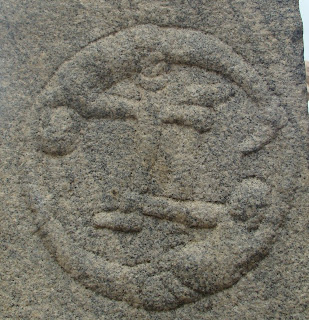 Outside the hall, there is huge footstep of Sita which has water all through the year. Apparently, Sita was considered a dwarf as the average height of human beings in that era was about 25 feet. Later I learnt that Lord Krishna was 150 feet tall!!! 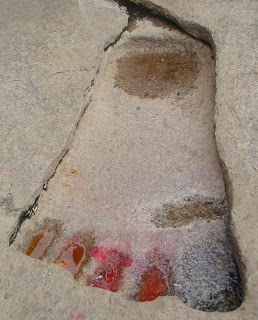 Further up, we saw a plate with 10 bowls around it. Here again, while we were wondering if this plate was shared by multiple people, guide clarified that it is one laborer’s plate. Laborers in that era were as tall as 15 feet and they needed THIS to keep them strong and healthy. Phew! 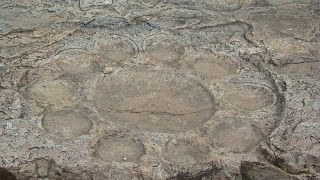 Walking towards the exit of the temple, we saw one Brindavana carved out of stone with a tiny tulsi plant, and some neatly barricaded scriptures in Kannada. 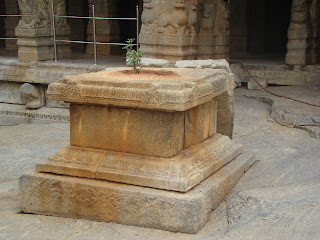 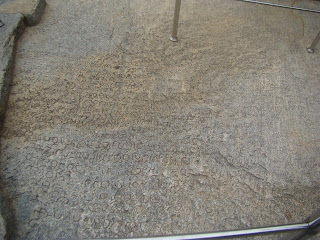 The guide doesn’t charge any fixed price. He is happy with whatever the tourists offer. This was in stark contrast to my experiences in Chitradurga and Badami where the guides charged Rs.200 after much bargain.

The uniqueness of the temple is that it has both Shiva and Vishnu idols.