Skip to content
The journey to Hubli was good. I was happy that the bus stopped at my fave Kamat Upachar for dinner.

I reached Hubli bus stand at 6.30 a.m. Hubli is a major city and I was assuming that the bus stand will be big and buzzing with activities. Surprisingly, what I saw was a old, small bus stand. The taluk bus stand in my native is bigger than this. Later I learnt that there is another “main” bus stand which met my expectations.

On the other side of the bus stand, the Badami bus was ready to leave. I got in and it started at 6.45. The conductor said they will reach the destination by 9.15. Disappointed at the duration, but glad that I got the bus immediately.

Saw some windmills on the way. Here is the pic: 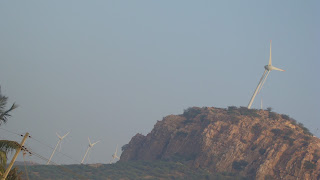 And a grandpa in the most common menswear of this region. His kurta looks so white. I wonder which detergent he uses. 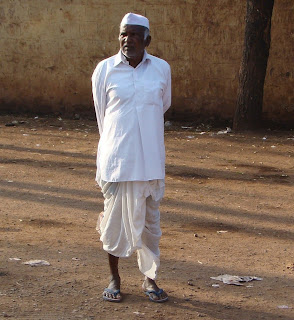 I reached Badami at 9.30, passing beside lush green crops (I think they were Jowar and groundnut among others.) on a mostly-decent road.

My first task at Badami was to find a place to freshen up. I looked for simple bath complexes, but didn’t find any. So, I had to check out a lodge.

Despite being a major tourist destination, there are only 4-5 lodges near Badami bus stand.

Considering I was getting late, I negotiated with Satkar for Rs.250 to use their room for one hour. Damn expensive.

The hot water bath brought some life in me. I worked out my itinerary with the lodge receptionist and hit the road at 10.30 a.m.

Day 3 – Tuesday – Complete Bijapur visit and take the bus back home by evening.

The most preferred mode of transport from Badami to Pattadakal is the Mahindra van. The van stand is conveniently located next to the bus stand (opp. Satkar hotel). The frequency is every 30 minutes and the journey duration is about 30-40 minutes.

I reached Pattadakal at 11.30 a.m. Pattadakal is a UNESCO World Heritage Site. “Patta” in Kannada means “Title”. These temples were built to mark coronation and victory of Chalukyan kings. Some of the temples here are more than 1200 yrs old. Except the Jain Temple and Papanatha Temple, all other temples are located in the same campus.

Here are some pics: 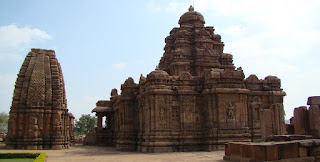 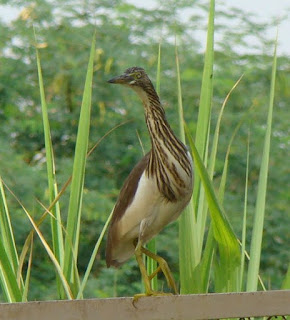 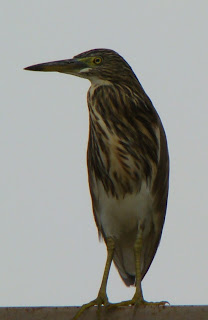 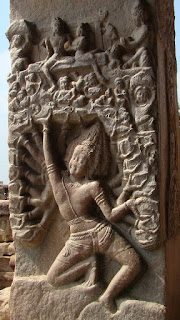 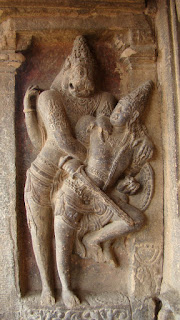 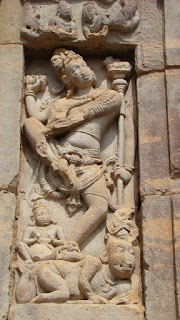 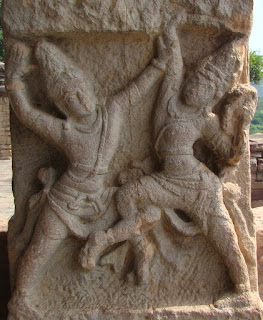 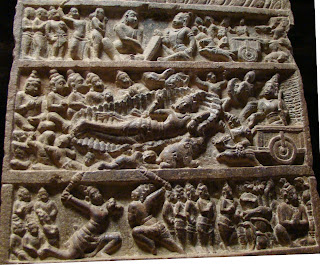 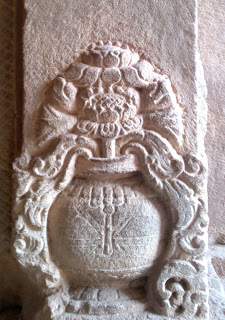 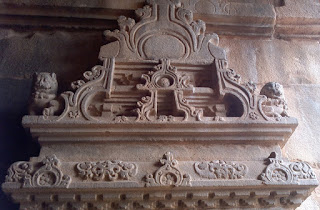 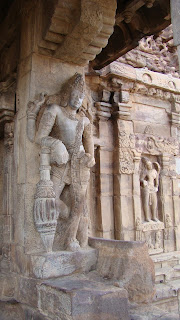 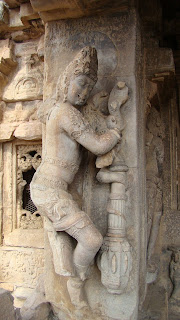 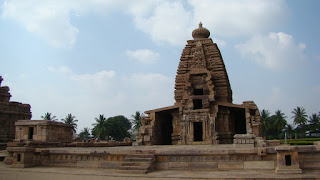 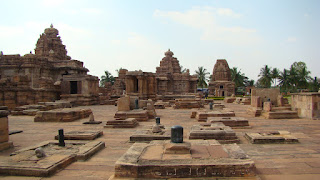 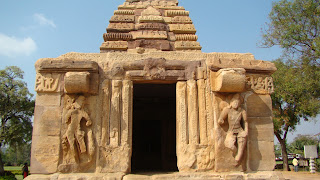 While planning my vacation I forgot that December is the annual trip time for schools in Karnataka. I got the first taste of that in the first place I visited. Half way through my leisurely walk in the temple complex, I saw 80-100 students walking into the main Virupaksha temple. That very moment I decided to quickly take some snaps of whatever I can and get out of this place. I wrapped up Pattadkal (or so I thought) at 12.30 p.m.

I came out and started walking towards the Jain Temple which is less than a kilometer away from the main temple complex. With hot sun on top, pothole-ridden road below, and the empty stomach in the front, my bag on my back started feeling heavy. So I started looking for “lift”. I was lucky enough to find a biker. In that less-than-a-min journey he told me that more important than the Jain temple is the Papanatha Temple located on the river side, outside the main temple complex. Wow! Did somebody say everything happens for a reason? Was he the god-sent messenger?

This was a Jain temple when Rashtrakutas built it. Now, I am told that there is a Lord Shiva idol in the sanctum sanctorum.When I went, there was nobody around.

From Jain temple, I walked back (may be, there was no need for a messenger this time) to the main temple complex. The guy at the ticket counter allowed me to use the same ticket I purchased earlier to re-enter the complex. With some hills as the backdrop, Papanatha temple looked more beautiful than others. With this, I concluded my Pattadakal trip.

By the time I came out, I was very hungry. I walked into a hotel in front of the temple complex and ordered Jowar roti (Tried to be a Roman in Rome).  Jowar roti is the staple food of this region (perhaps most of North Karnataka). The roti is served with three side dishes: Curry, Sambar, and the Curd-chilli powder combo. The curry tasted fiery by my standards. Seeing my plight, the guy at the hotel (supplier-proprietor-cashier everything in one) suggested I try the Curd-chilli powder combo. I ignored the chilli powder and used only the curd. Felt so much better. After that I had sambar rice and curd rice and wrapped up my brunch. Annadaata sukheebhava. The guy wanted me to buy dried jowar rotis which supposedly last even 6 months. I politely declined.

With my stomach taken care of, I started on my 2nd part of the day’s trip. I still had to visit Aihole and Mahakoota as per the plan.

The only means of public transport from Pattadakal to Aihole is the auto. After much bargaining and threats to skip Aihole, I got one guy who offered me a to-and-fro trip for Rs.220. For a total distance of about 25 kms, I think it was fair deal. (My logic for auto fare was simple. I just used to compare it with the 9 rs/km fare in Bangalore and if it is same or cheaper than that, I am in.)

The road from Pattadakal to Aihole is pathetic. Villagers have cut the road to lay water pipes every 500 meters.

Here are the Aihole pics 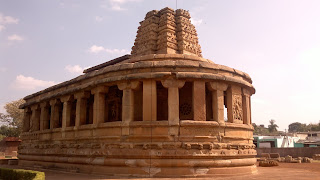 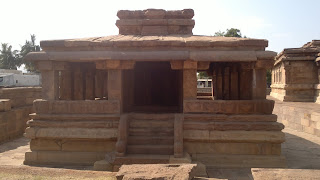 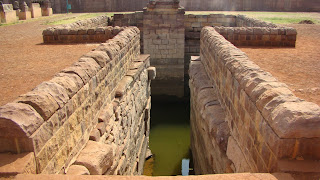 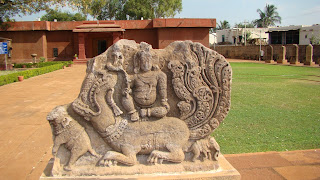 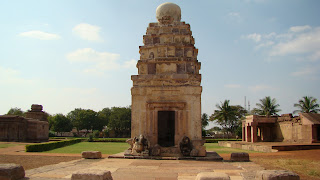 Aihole and Pattadakal temples are built using the stones available in the surrounding 30 villages. Badami is built using locally available stones. I found Aihole so boring that I was reluctant to even get down from the auto when my driver stopped at a temple on the way back. Perhaps it was the overdose of monuments.

However, he was adamant. He took me to a small, but nice, isolated temple next to Malaprabha river as well. 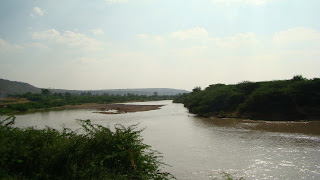 He asked me to take this snap, but later realized that there is no memory card in his mobile phone to get it transferred. 🙁 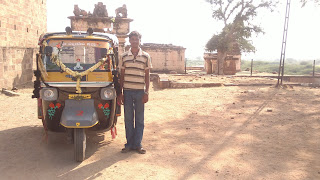 We returned to Pattadakal at about 3.15 p.m. My next destination was Mahakuta.

There is no direct transport from Pattadakal to Mahakuta. So, I had to get into a van going to Badami, get down at Nandikeshwara and take an auto from there to Mahakuta.

I reached Nandikeshwara at 3.30 and negotiated an auto for Rs.100 for a to-and-fro journey of 10 kms. The Nandikeshwara-Mahakuta road was so good that we reached our destination in less than 10 mins.

When I was looking for info on these places, one of the bloggers had mentioned that he liked Mahakuta more than Aihole or Pattadakal. So, I had some high expectations from this place. However, I was disappointed. I did not even feel like taking a snap inside the temple complex. Here is the only snap I took there. 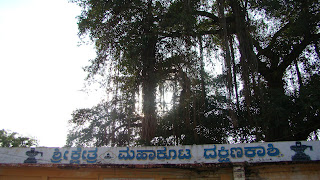 I was out of Mahakuta within 5 minutes. Quite understandably, my auto driver was surprised.

On my way back, I told the auto driver that I plan to visit Banashankari next day. He suggested that I can cover Banashankari on that day itself as it was still 4 p.m. Moreover, he said, there are plenty of autos plying on Badami-Banashankari route and there is nothing much to see in Banashankari. I agreed and we were back at Nandikeshwara at 4.15 p.m.

While I was waiting for the van to Badami, the auto guy had gathered some passengers to Banashankari. So, there I go. My last destination before I retire at Badami.

Banashankari, as the auto driver said, doesn’t offer much to see. There is a temple, a lake in front of it and couple of towers which look like watchtowers. 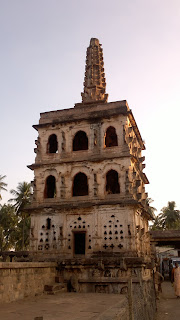 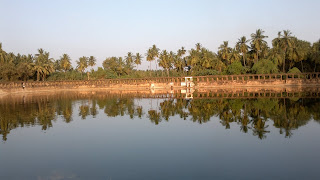 I was done with Banashankari at 5 p.m. I bought some godambi kalyanaseve (cashew rolled in a sugar candy) and tasted some karadantu(some sweet made of coconut and jaggery) while I waited for an auto to Badami. Finally, I was back at Badami at 5.30 p.m.

I was really tired by then. Hot sun, pathetic roads, and just one meal had drained my body. All I wanted was a bed and I was sure I wouldn’t care about the world once I find one. Despite that, I was not willing to spend more than Rs.300 on the room. This time, since I had nothing else to do for the rest of the evening, I had decided to check out more guest houses, even if they are slightly far from the main road.

After roaming around the road and enquiring with few people, I finally found a lodge by name Lakshmi Vilas which had a cozy little single room with TV and hot water at Rs.250. This place is on the way to the bus stand, towards the caves. I checked in and hit the bed. Hardly five minutes into the sleep, my colleague called me for a party at her house. I gave her my status update and went to sleep again. After that, except couple of interruptions from my mom and another colleague, I had a good sleep till 9.30 p.m.

When I came down for dinner, I realised to my horror that the restaurant attached to my lodge was closed. When I walked out to the street, I found that most of the shops and restaurants were closed. I decided to walk up to the bus stand and if still nothing is available, eat some leftover chaat at the roadside.

Luckily, a “multi-cuisine” restaurant right opposite to the bus stand was still open. I ate leftovers there itself. But the curd rice there was really good. One of the best I have had in any restaurant.

Badami is pronounced “ba-daa-mi” and not “baa-daa-mi” as I thought earlier.

The hotels at Pattadakal are roadside makeshift structures and not concrete buildings. So, if you are one the who can’t eat there, carry your own stuff.  Yeah, they are clean though.

The auto guy’s parents joined me on the way to Aihole. They were so respectful towards me that though the father sat next to me, he maintained few inches between me and him. (NO! It was not my body odour! :P)

I saw many “lingayata khanavali” type of restaurants in Hubli. They were as common as “darshinis” in Bangalore. Any idea why they are associated with that particular caste? I mean, what is the specialty?