Yesterday was a hectic day.

When the day began, I had my plans clearly defined.

But then, my plans never work.

First up, Balu, called me at 10 a.m and said that his plans of visiting Chitra Sante with his friends is cancelled and he will be joining me. I was so glad to hear that. Balu is an artist. So, it is always a delight to visit Santhe with him. He explains me whats, whys, and hows of a painting. He has been accompanying me for the last 4 years or so and during this period, I have learnt to appreciate the art (in this case, paintings) in a much better way just because of him.

We met at the Monotype bus stand, visited the temple at Majestic and reached Chitra Sante at 11.30. Both of us had agreed that we have some important work to do back home and should leave the place by 1.30 max.

But as we went around, we realized that the number of stalls have increased and we have so much to see. Among them, there were few excellent ones, many good ones, some bad, and atleast one worst.

Art is about creativity. It is about being different, being oneself. There may be 10 paintings of a river flowing between two hills, but a good artist can bring in uniqueness in each of them and yet maintain his/her signature style. This time, we got to see some such exquisite piece of work which will stay in our mind for long. The innocent smile of two kids sitting on a branch of tree, the anticipation in the eyes of a lady leaning on a pillar at the entrance of her house, the rage of bulls in bullfighting, or a mural depicting the stone age carvings in caves — each of them was perfect. They were different. They had the Wow! factor.

The most unfortunate trend we saw in this year’s fest was the increase in number of copycats. For example, few years ago, a painting of an elephant sold for a record amount in this fest. This time, we saw that every third stall had atleast one similar painting. It was either the exact replica (which means the same color, size, and position, and not the same quality), or a slightly modified version.

Similarly, we had several paintings of Buddha’s face, Godhuli, Ravivarma’s works, etc. Some of them were good, but none of them were convincing.

Here is the pic taken at the entrance of the fest: 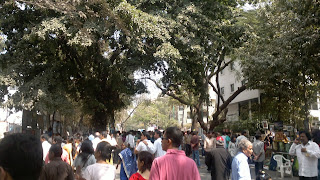 I haven’t taken pictures of even the best ones because I don’t want to see their imitations next year.

Finally, we were done by 3 p.m. It was not as early as we wanted it to be, but it was still the quickest of our visits.

About Chitra Sante
Chitra Sante is an annual art fest organized by Karnataka Chitrakala Parishath. Anybody (from amateurs to professionals) can book a stall, which is an area of about 10 ft x10 ft on the Kumara Krupa Road’s footpath, for a nominal fee (this year, it was Rs. 100). Every year, there are hundreds of stalls showcasing thousands of paintings and murals.

My association with Chitra Sante:
My ex-colleague from Edutech, Suresh Waghmore, a regular participant in this fest, invited me to this fest when we were working together. Back then, for me, it was just an opportunity to see his works. Later, after I left Edutech, it was also an opportunity to meet some old friends who come to see his works. And yeah, he does some wonderful paintings. This is not just my opinion, it is Balu’s as well. (Balu is quite frank on that front. If he finds some issue in a painting, he explains it to me. It doesn’t matter to him if it is my friend’s work or his friend’s work.) You can see a sample (which does not his include his latest passion — Abstracts) at http://www.visualartz.net/.